This little addition will probably be the last one this week as I have so much stuff to catch up on. I have been so engrossed in making these little critters that my housework has been sat on the back burner - so tomorrow I will be catching up big style!

I bought this little bit of material (6in x 20in) the other day for 50p and I knew that i would at least make a little owl or two from it. The back of Barney is made from Dark Brown felt that I also bought the other day. 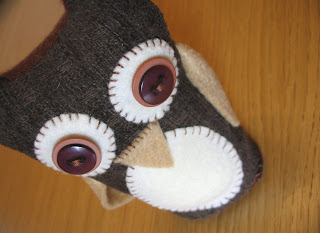 I attached the bits for his face then started sewing and attached one of his wings - then as I got to the other side I attached his other wing without really taking notice of the position (I'm a fool) and realised after i had turned him inside out, that it was higher than the other one. So as you can see one wing is sort of at an angle and the other is attached straight. I have now learnt my lesson for the day - PAY ATTENTION to the details! :*) 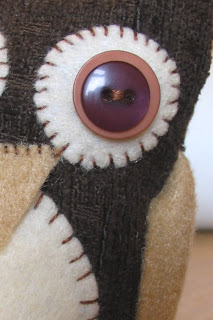 Some of the kids on the street now want me to make them some - but I have declined - well to be honest i am enjoying making them for myself! :) :)

Tonight whilst hubby was on the computer looking at House Insurance I made myself a little pincushion to pass away the boredom - I think it looks cute - but hubby thinks its strange!!??? I will remember to get a photo of it soon and stick it on here - you have to promise not to laugh though! :)

Before I get off for the night here is the little mouse that Caitlyn my eldest made. I think she did a brilliant job as it was her first attempt. I helped her a little but she managed to do about 95% of it. 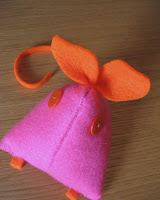 She chose the colours herself - bright pink and bright orange and it is BRIGHT! I cut out the shapes for her and she did a small test piece first to make sure her stitching was ok. The tail was last minute or should I say forgotten! She had finished stitching then decided to add a tail so I attached it for her using the button. It kind of looks cute!

And here is a piccy of Caitlyn with her mouse - she is so proud of what she achieved.

So getting off now - so catch you all later.