I have finally taken the plunge and decided to try one of the dares from DCM.

Shrink to Fit by Kathy

So this week I'd like you to think small - not small cards, but small spaces of embellishment on regular sized cards.
You are allowed to cover no more than a 5x5cms area of your card with paper or embellishment - the rest of the card must be left plain.
How you use those valuable cms is up to you. So you may choose to split up those cms to use around your card, or use them in a block or a line. It might help to cut a few 5x5cm squares then cut those up to work out good ways of using your allotment. Making your whole card a miniscule 5x5cms is NOT an option!! Lets have no cheating (I know what you lot are like.....),but because I'm feeling generous, I'm going to let you add a SIMPLE greeting as extra to your 5x5 allowance! :-)

Well here is my attempt. 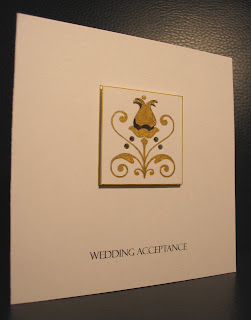 I have been asked a few times if i make Wedding Acceptance cards and i always say no - but when i seen the challenge I knew what I wanted to do. I just love white space on cards and I don't do them very often.
The flourish is a font dingbat that I coloured in using my Pilot Gold Pen. http://daringcardmakers.blogspot.com/

I hope to take part in more of these challenges - if time is on my side!

My friend who asked me to make the 40th card rang me again to see if I would make a 21st card for a lad. She doesn't need it till Wednesday but I thought I would get it done early. 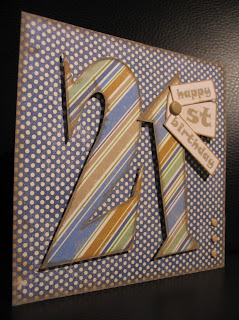 Now some of you know me by now - how critical I am of my cards. I will probably put this to the side, as I am not totally happy with it. I just don't think it looks right if you know what I mean. I think its the stripes on the numbers to be honest. I tried to get them to match, as in the stripes were in line with each other on each of the numbers (hard to explain). Can you see what I'm on about! But it hasnt worked right. 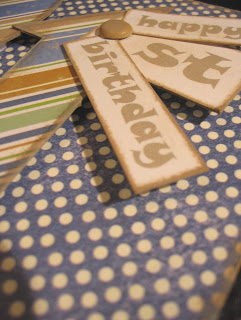 Hubby says its fine but.... well what does he know???? He is even more critical of my cards than what I am. LOL!

I used the Dovecraft Masculine Paper Pack, Dovecraft Brads, computer to print off the numbers and the words. I also used my new Creamy Brown Chalk Pad that I got yesterday to go round the edges and I also used it to colour the brads.